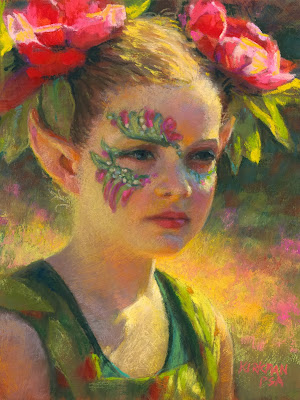 The secret to happiness, according to Winston Churchill, is "...to find a task that requires perfection, is is impossible to achieve, and spend the rest of your life trying to achieve it." That's the way I felt painting this one, for sure! I think what I've learned is that for an easier time, I should pick a subject that is less beautiful and a photo that is less magical. This little girl won the childrens' costume contest at the Renaissance Festival a few years back, and I've been awed by her beauty ever since. She really did look like an elf, sprite, or woodland fairy creature. She had an ethereal, otherworldly glow about her and an expression of such innocence that after no less than four completed attempts, I still didn't quite catch. I also made her look older, not on purpose. But after the struggle I had working this into a painting that I could be happy with, I decided to stop well short of the perfection of her reality. I've decided not to post the photo here, it just makes me disappointed in the portrait.

I have tons of progress shots, ranging over more than a year of sporadic effort on this piece. Too many to post here so I'm going to attempt a sort of animated movie showing her from start to finish (..to second finish... then third finish... then fourth...)

For now I'll just show you the three other versions that I thought were finished, until I decided they weren't.
(btw, none of these others are separate paintings, but are stages of the progress of this one, that were wiped out or modified as she progressed into what you see above, the final finished "Elfling.")

Thanks for reading! Stay tuned for a link to the 'video-compilation'!